A girl who makes lamp wicks scores 98.5% in SSLC 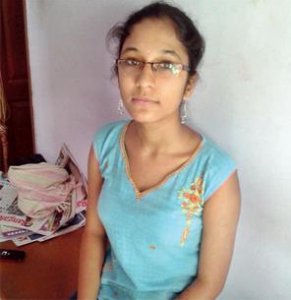 Ever wondered how draining it is for a 15-year old girl to balance school and work and support her family?
Meet Anagha G from Soundarya Educational Trust, who sailed through her SSLC exams with 616 out of a possible 625.
She secured 100 per cent marks in the first language Sanskrit and Social Studies, 97 in Science, 98 in Maths, 99 in third language Kannada and 97 in second language English. Anagha helps her mother Gayatri G make and sell lamp wicks from cotton. She also babysits children from affluent families to earn a few extra bucks. Anagha told Bangalore Mirror, “Education is a costly affair for me. When my friends used to go to tuitions, I could never afford one. I preferred to sit at home and study.” There was a time last year when her father lost a job. “The situation was so bad that our landlord wanted us to vacate the house as we could not pay the rent in time. My family also could not afford my school fees. A neighbour who saw our plight paid the fee. An uncle from Shimoga would send us PDS rice, which he got from his quota.” She says that whenever a financial crunch threatened to stop her education, it was her determination to bounce back that kept her moving. “Our family had moved to Bangalore from Shimoga as my dad preferred to work here. But, he has been in and out of jobs for quite some time and we decided to go back to our native place. However, this would have affected the education of me and my sister.” Anagha came up with the baby-sitting plan. “We requested our neighbours, a working couple, to leave their kids at home with us, so that we could take care of them and earn some needed money. We got to know that there was a great demand for wicks, so started making them.” Her biggest worry now is how to raise money for college. “I am in a fix on whether I should pursue my higher studies or start working to support the family. I still feel that studying is important so that I may work towards getting a stable job and help other students who are like me,” Anagha said. Gayatri said she was determined that her daughter would study well and she would work hard to make her study despite all the odds. Anagha wants to become a doctor and a philanthropist. Her parents can be contacted on 8453466213.