By admin on September 28, 2014Comments Off on Career Utsav – 14 the Biggest Education Fair coming soon in Bangalore

Career Utsav involves over a dozen seminars and workshops on different careers by leading brands belonging to the field. And this makes 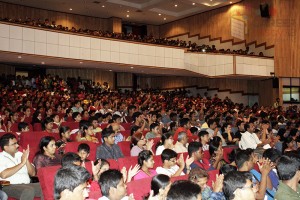 the event stand out of the crowd. This is a pioneering construct, and all visitors are visibly impressed by the scale and depth of these engagements.

Now in its third year, the event has now grown to include over 200 leading schools, and colleges, participation of 70+ Brand and institution’s. The previous year saw us reach to an overwhelming 50,000 people and over 8,000 students and their parents actually visited the exhibition, attended the speaker sessions, and participated in the workshops.

Career Utsav – 14 the Biggest Education Fair coming soon in Bangalore added by admin on September 28, 2014
View all posts by admin →