The CAT results for 2014 were out on saturday evening and this year 16 students have scored 100 percentile, double 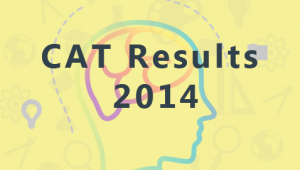 Among the students who scored 100 percentile is a Delhi girl , Neha Manglik, who is the first girl candidate to have achieved this in CAT history.

CAT is the entrance exam for admission to 19 of India’s premier Indian Institutes of Management (IIMs) which include 6 new ones and 70 other top B-schools in the country. Over 1.62 lakh students appeared for the exam.

Two Bengaluru boys have scored 99 per cent in the Common Entrance Test (CAT) 2014, the result of which was out on Saturday. Another boy from the city is reported to have scored a perfect 100 per cent. The results that were expected to be announced only in January 2015, were revealed on Saturday evening.

There was a lot of anxiety among the result seekers as most could not check their results. It was announced that results would be available after 7 pm, but candidates couldn’t access the official site. The explanation given by officials was, that as thousands of students were logging in at the same time, the site crashed and needed some time to restore. Students felt that this was becoming a common feature every year and that it was time the CAT organisers got thier acts together and solved the issue.