By admin on June 23, 2015Comments Off on Indian Students Honored as Winners of Broadcom MASTERS ® International Competition

Three middle school students from India were selected by the Broadcom Foundation to participate in the 2015 Broadcom MASTERS® International middle school science and engineering program.These young innovators have been awarded an all-expense paid trip to the United States because of their academic excellence and leadership in STEM (science, technology, engineering and math). 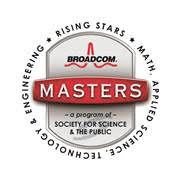 Broadcom MASTERS International provides a rare opportunity for early collaboration between middle school scientists and engineers from around the world. The Broadcom MASTERS International brings together winners from 16 countries who share a passion for STEM (science, technology, engineering and math) subjects and inspires them to stay with math and science throughout high school. The weeklong program is held each spring at the Intel International Science and Engineering Fair (ISEF), the largest high school science fair competition in the world.

From May 10–15, 2015, Shivarama, Harsh and Saad joined 15 other delegates as official observers at Intel ISEF in Pittsburgh, Pennsylvania where they had the rare opportunity to visit universities, engage with Broadcom employees and STEM professionals, shadow high school students and engage in special Broadcom MASTERS events exclusively designed to foster team-building and leadership skills. In addition to funding the Broadcom MASTERS International delegate’s trip,  Broadcom Foundation also provides financial support to his or her affiliate fairs around the world as part of the Broadcom’s commitment to promoting project-based learning as a cornerstone of STEM education.

“We are honored to welcome Shivarama, Harsh and Saad to be among the 2015 class of the International Broadcom MASTERS,” said Paula Golden, President and Executive Director of Broadcom Foundation and Director of Community Affairs at Broadcom. “Through their love of science and engineering, these young innovators transcended cultural and language barriers, to build friendships and collaborations that will last a lifetime.”

Broadcom MASTERS International is a partnership of Society for Science & the Public (SSP). SSP-affiliated national fairs in countries around the globe award a middle school student who demonstrates acumen in STEM subjects and shows promise as a future leader competitor the unique opportunity to participate as a Broadcom MASTER delegate. In 2015 Broadcom MASTERS delegates will hail from Australia, Canada, China, Czech Republic, India, Ireland, Israel, Japan, Mexico, Singapore, South Africa, South Korea, Taiwan and the United Kingdom. Two finalists from the U.S. Broadcom MASTERS competition are also chosen as delegates to the international program.

Indian Students Honored as Winners of Broadcom MASTERS ® International Competition added by admin on June 23, 2015
View all posts by admin →