By admin on May 4, 2014Comments Off on Nikshep the rising Tennis Star

Ballakere Ravikumar Nikshep, a 12-year-old Tennis player says his ambition is to play for India. His dream has been realised to a large 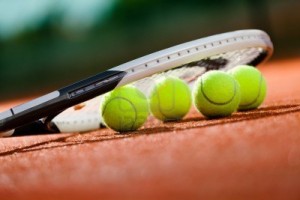 extent for he has been included in the Indian team for the Junior Davis Cup matches. Surely, he is inching closer to the senior team.

The right-handed player with a scorching double handed backhand has been making waves in recent years. The boy from Kadur in Karnataka is the reigning National Under-16 boys singles champion and the current Under-16 No 1 player in the country. His selection for the Asia-Oceania Zone tournament at Kuching, Malaysia, was no surprise.

“I thank my parents (G K Ravikumar and Shobha B G), for all their support. I must make a special mention of DYSS, SAK, KSLTA and Go Sports Foundation and also MP Ramya for their encouragement and support over the years,” Nikshep said.

He took to the game by chance. Watching the French Open in 2004 on television impressed Nikshep so much that he decided to become a tennis player. “My parents had little knowledge about tennis and I too had never thought about playing tennis. In 2004, when I was watching a sports channel, I saw a French Open match between Guston Gaudio and Guillermo Coria and told my parents that I too wanted to play tennis. They were very supportive and thus I started learning tennis when I was seven,” he says.

He started off in right earnest and began to assert himself in the under-12 and under-14 catergories. In the Asian Under-14 series tennis tournament in 2011, he triumphed in both the boys singles and the boys doubles.

The 16-year old Nikshep, a II PUC student of Bangalore’s Surana College, won the under-16 singles and doubles events in the Junior Nationals in Delhi in 2013. He also won the ITF junior doubles title with Alex Solanki in November 2013 in Mumbai. He reached the finals in doubles in the ITF tournament held in Bangladesh and played in ITF events in Sri Lanka and Qatar. Since 2011, Nikshep has represented India  four times in international events in Doha, Malaysia, Philippines and last year’s Junior Davis Cup tie in South Korea.

He also bagged a national award for excellence in sports from the Ministry of Women and Child Development.

Nikshep the rising Tennis Star added by admin on May 4, 2014
View all posts by admin →