Indian-American Gets Accepted by All 8 Ivy League Schools

By admin on April 15, 2015Comments Off on Indian-American Gets Accepted by All 8 Ivy League Schools

An Indian-origin girl, Pooja Chandrashekar, aged 17, has managed to get admission to 14 top US universities, including all eight Ivy League schools considered the most prestigious varsities worldwide.

Virginia-born Pooja Chandrashekar decided to apply to all eight ivies hoping to get into just one of them. But now she has the choice to get into Harvard, Yale, Princeton, Cornell, Dartmouth, Columbia, Brown, and the University of 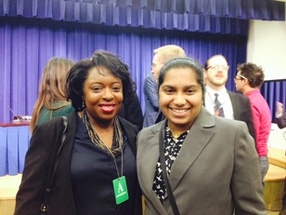 Pennsylvania besides six other elite universities in the US, including Stanford and MIT, reports PTI.

Pooja, the only daughter of two engineers who emigrated to the US from Bangalore, got a SAT score of 2390 out of 2400, a 4.57 grade point average and aced all 13 of her Advanced Placement exams.

The teenager has more than her academic achievements to fall back on. Besides the high score, what also boosted her application is enterprise, initiative, and creativity.

The brainy teenager, who graduated from Thomas Jefferson High School for Science and Technology, a top-ranked magnet school in Virginia, has developed a mobile app that analyses speech patterns and predicts with 96 per cent accuracy if a person has Parkinson’s disease.

She has also founded a organisation that encourages middle-school American girls to participate in science, technology, engineering and math (STEM) programmes.

Pooja said that she decided to apply to all eight ivies hoping to get into just one of them, “because college admissions is really unpredictable.”

“They are all fantastic schools, so I couldn’t discount any of them…I wanted to make sure I could get into a really good school and have more choices,” she told The Washington Post.

She has narrowed her list to Harvard, Stanford and Brown, where she got into a programme that guarantees her admission to the university’s medical school.

Pooja said that what sets her apart is her passion for promoting STEM among young girls. Her non-profit ProjectCSGirls, hosts nationwide computer science competitions, “dedicated to closing the tech gender gap.”

She wrote one of her college application essays about being a woman interested in a career in computer science, a field long dominated by men. She said she was often one of just a handful of girls in her high school technology classes.

“I want to encourage diversity in the field,” she told the daily.

Even with her lofty accomplishments, Pooja is like most other teenagers. She enjoys watching television shows like Shark Tank and listening to Bollywood music.

She is also a fan of the Food Network channel and she said she is amazed by the chefs who show off their skills in the kitchen. However, it’s one subject she admits she has not mastered.

Indian-American Gets Accepted by All 8 Ivy League Schools added by admin on April 15, 2015
View all posts by admin →