By admin on May 16, 2014Comments Off on PUC admissions – Science stream trending

The demand for the Science stream in Pre-university (Std XI  – XII) colleges is on the up. 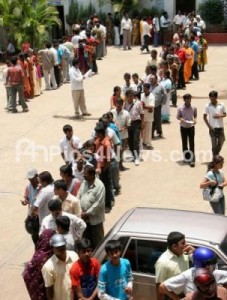 Vidya Mandir independent PU college at Malleswaram has given out more than 2,700 application forms for science and 1,078 for commerce. According to principal Bharathi Babu Doraiswamy, the PCMB (physics, chemistry, mathematics, biology) combination is most in demand. “The cut-off percentage will be announced as per the calendar of events announced by the Department of Pre-university Education,” she said.

MES PU College of Arts, Commerce and Science has given out around 6,000 application forms and principal L Ramu said the highest demand is for the electronics course, as in the previous years. In Surana PU College, the science stream is picking up this year, said principal B R Chandrashekarappa.

Jain PU College has given out 9,800 application forms so far and is expecting to distribute another 6,000. Most enquiries made have been on PCMB for science and accountancy, business studies, mathematics and statistics combination for commerce.

According to the calendar of events issued by the Department of Pre-university Education, Friday is the last date for issuing application forms and Monday the deadline for submission of completed forms. The list of applicants, in order of merit, have to be put up by colleges on May 24 while the first list of selected students should be released on May 27.

PUC admissions – Science stream trending added by admin on May 16, 2014
View all posts by admin →