By admin on April 19, 2015Comments Off on Punjab Univ electrician‘s son cracks CAT, will join IIM-Bangalore

Share on Facebook Follow on Facebook Add to Google+ Connect on Linked in Subscribe by Email Print This Post
Hailing from a small village in district Gonda in Uttar Pradesh (UP), Yadunath Shukla shifted to Chandigarh long back in 1984, to earn a living for himself, and his family of four, including his wife, and three children. Since, then he has been working as an electrician in the Construction Office of Panjab University (PU). 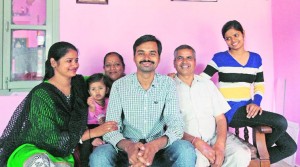 However, on Saturday, it was not his identity as an electrician and the challenges that he went through that he talked about, but the proud moment of being father of an IITian, who has now secured admission in one of the most prestigious management institutes, Indian Institute of Management (IIM), Bangalore.

Shukla’s son, Ram Narayan Shukla, 25, has recently cleared the interview stage after cracking CAT, and is all set to leave for Bangalore to pursue his MBA IIM-Bangalore. Talking about his journey, Ram Narayan said, that had it not been for the dream of his parents, he would have lost hope long time back.

“I appeared in the CAT exam four times in last four years, and each time lost by a margin. Last year, I could not clear the interview stage, and so, I had decided to give up. But, my father wanted me to try once, and I cleared the exam this time. Parents blessings can do magic. I still remember how he struggled in the initial days,” said Ram, recalling the days when he felt dejected about the failed attempts.

An alumnus of Government Model School, Sector-16, Ram had started preparing forengineering entrance examinations in Class-12th, and got selected for admission in BTech in Indian Institute of Technology (IIT)-Delhi in the first attempt in 2007. In 2011, soon after passing out of IIT, he took up the job of a Consultant in Gurgaon based Price water house Coopers Private Limited, where he is currently employed.