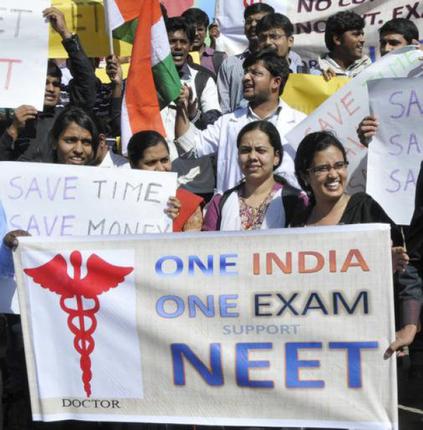 The Supreme Court on Thursday gave the green signal for the CBSE to hold the National Eligibility Entrance Test (NEET) 2016-17 in two phases and approved the Medical Council of India’s schedule for the common entrance exams for undergraduate medical and dental courses starting May 1.

A Bench of Justices Anil R. Dave, S.K. Singh and A.K. Goel revived the NEET across all States despite strong protests from States like Tamil Nadu, Karnataka and Uttar Pradesh that it was too late.

The court revived the NEET notifications of December 21, 2010, and said the common entrance exam would be held this academic year notwithstanding any orders to the contrary from any other courts. All challenges to this order would come directly before the Supreme Court and be heard in due course, the order said.

The court said the 2013 judgment quashing the NEET is not in operation as of date as the Supreme Court had recalled it on April 11. Hence, it said, there was no bar against conducting the NEET this academic year.

As per the NEET schedule submitted by the CBSE, the All India Pre-medical/Pre-dental Entrance Test, scheduled for May 1 and for which 6,67,637 are to appear from 1,040 centres in 52 cities, including abroad, will be considerd as NEET-1.

This will protect the interests of students who had left their homes for the exam and have fully prepared for it.

NEET-2 will be conducted for the remaining candidates, and the entire process, from collection of information from the States to declaration of results, will begin from May 7.

NEET-2 will be held on July 24 and the results published by the CBSE on August 17.