The demand of commerce courses getting higher

By admin on April 14, 2015Comments Off on The demand of commerce courses getting higher

Commerce courses in city colleges are continuing to ride a high wave and managements are leaving no stone unturned to cash in on it. With demand for arts and basic science courses fizzling out in many undergraduate colleges and their departments being closed in some, college managements are offering a plethora of choices under the Bachelor of Commerce (B.Com.). 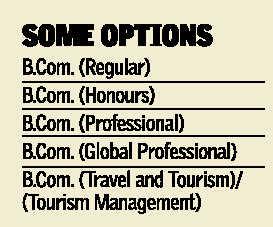 From an ‘honours’ course to a ‘professional’ one, and from travel and tourism to international accountancy, those choosing to pursue B.Com. are spoilt for choice. “For the last five to six years, only commerce courses have sustained themselves in degree colleges, mainly because of the employment opportunities. In fact, in most colleges, 50 per cent of the total student strength comprises commerce students,” said B.S. Srikanta, honorary president of the Bangalore University First Grade College Principals’ Association.

Endorsing this, principal of a well-known college in the city said his college received over 4,000 applications for the 500 seats available.

However, the traditional B.Com. is what attracts most students, say colleges. “For colleges under Bangalore University (BU), it is still about the regular B.Com. While major experiments are being made in New Delhi, Rajasthan, Gujarat and Maharashtra where commerce is very popular. Over here Bangalore University revises the curriculum once in three years,” said another principal.

But is this the boom before the bust? “Between 1996 and 2003, Bachelor in Business Management (BBM) saw a similar successful streak. Now, there are not many takers for it,” he pointed out.

The demand of commerce courses getting higher added by admin on April 14, 2015
View all posts by admin →