Shouts of excitement and thrill reverberated throughout BMS College of Engineering as the college fest “Utsav  2015” organised in association with Bangalore Mirror, concluded on Friday. The three-day extravaganza witnessed some highly competitive events including Bass drop, 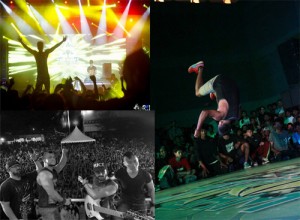 bands and the debate competition amongst others. The second day saw one of the most interesting sport events; ‘3 on 3 Basketball’ and ‘4 on 4 football’, which were eye-catching events.

However, the craziest of them was ‘Gully Cricket’. This event saw more than 120 teams taking part in the cricket match which was played on a ground nearly the size of a volleyball court. These matches were played for four overs a side. The gully cricket champs had the best opportunity to flaunt their unique cricketing skills. The thrill, the excitement and the fun got onto not just the six players on the field but also every member in the audience. The battle of bands was another event to remember. This intense music competition was turned into a musical retreat by the audience! The bands out there on stage continued to keep the audience pumped up.

Another eye-catching event during the fest was ‘Happy Feat’. This solo dance competition was contested by participants from more than 40 colleges of Bengaluru and other cities. This event saw dancers displaying various dance forms such as hip-hop, contemporary, b-boying and also the classical dance form Bharatanatyam. The DJ night saw an introductory act by DJ Tejj and the later part of the evening saw a crowd of more than 10,000 people grooving to popular EDM beats played by DJ Zaeden.

On the final day, the celebrations began with a loud and roaring street play event. Hogathon was another fancy event that was competed among big foodies. But two events that were the highlight of the day were turtle JAM and Red Bull tour bus. Bboy Kleju, the judge, was specially flown all the way from Poland for Turtle JAM! This B-Boying competition saw some breath taking, extremely enthusiastic performances. The 1 on 1 event later gave way to the Crew vs. Crew event. This event was competed among the best B-Boying teams from various parts of the country.

The fashion show had over 10 colleges participating with each team showcasing collections that were spectacular: collections included traditional Indian wear to contemporary designs. The Bass drop performance by Zaeden, who has been featured as the Hardwell on Air, and has been associated with some of the leading artists from around the world, entertained the audience and made sure everyone was tapping their feet to the groovy numbers! Sahas, the adventure club of BMSCE kept adventure enthusiasts on their feet on the second day of Utsav with events like wall climbing, obstacle cycling amongst other competitions.