By admin on May 13, 2015Comments Off on Vishvajith Prakash Hegde from Sirsi Lions English High School tops in SSLC exam

The 2014-15 batch of Secondary School Leaving Certificate (SSLC) students have created history by recording the highest pass percentage, 81.82, in more than four decades. 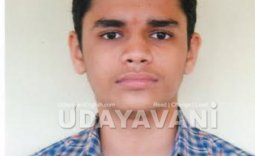 According to Karnataka Secondary Education Examinations Board officials, this is the best result since the inception of the board in 1969. They don’t have records dating further back.

A boy from Sirsi education district, Vishvajith Prakash Hegde of Sirsi Lions English High School, is the topper with 623 marks out of 625. Five students have shared the second spot by securing 622 marks each, while the third spot is even more crowded with 15 students, including Dhyana S of Sadashivnagar.

Government schools recorded a pass percentage of 83.09, private aided schools 83.3 and private unaided 89.19. This year, 8,56,357 students appeared for the examinations and 36 were debarred over cases of malpractice across the state. 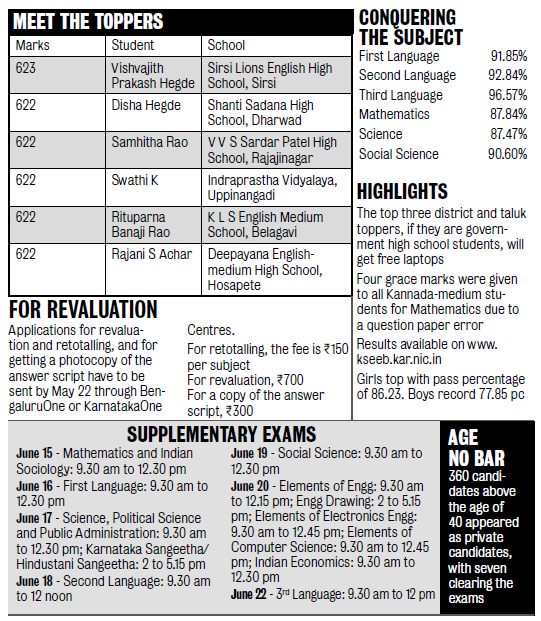 While the results are already up in the KSEEB website, they will be announced in all the schools on Wednesday afternoon. “We have dispatched the results list and the schools will receive them by Wednesday morning,” said Mohammed Mohsin, Commissioner for Public Instruction.

Meanwhile, the results of 150 students from eight schools, identified as unauthorised by the government, have been withheld. “Based on the High Court order, we allowed the students to appear for the exams. But we have withheld their results,” Mohsin said.

The marks cards of the regular fresh candidates will mention the grade, class and percentage. Those who wish to apply for revaluation and retotalling, or for a copy of their answer scripts, have to do so before May 22 through BengaluruOne or  KarnatakaOne centres. The supplementary examinations will be held between June 15 and 22.

This is the first batch of students to have attempted the 80:20 pattern, in which theory carries 80 marks and Continuous Comprehensive Evaluation (CCE) 20. According to officials, CCE is the main reason for the students

Vishvajith Prakash Hegde from Sirsi Lions English High School tops in SSLC exam added by admin on May 13, 2015
View all posts by admin →