By admin on February 14, 2015Comments Off on Indian Techie recieves $12500 for discovering Facebook Bug

Laxman Muthiyah from India has received a 12,500 dollar bounty for discovering a Facebook bug that allowed 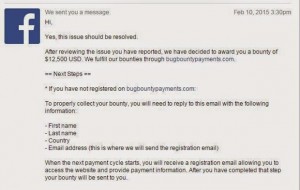 According to TechCrunch, the bug allowed anyone with a bit of technical know-how to delete any photo on Facebook.

Facebook fixed the bug shortly after it was discovered.

Laxman has a breakdown of how the bug, that deletes another users’ photos, works.